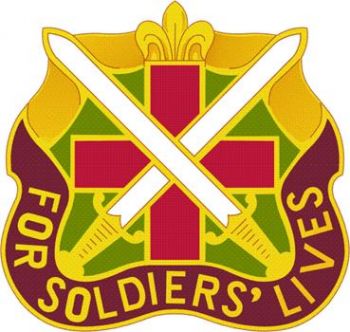 A gold color metal and enamel device 1 1/8 inches (2.86 cm) in height overall consisting of a red Greek cross with a gold fleury at the top, surmounted by two white swords in saltire, guards, hilts and pommels gold all in base and all above a maroon scroll doubled gold from the lateral arms of the cross, terminating at the fleury and inscribed “FOR SOLDIERS’ LIVES” on the maroon portion in gold letters; all open areas enclosed by scroll are of green.

Maroon and white are the colors used for the Army Medical Department. A red cross is symbolic of aid and assistance and crossed swords denote military power; together they represent the overall mission and capabilities of the organization. The fleury refers to the unit’s participation in the Central Europe campaign, World War II. The colors red and gold refer to Vietnam where the unit participated in fifteen campaigns. The award of four Meritorious Unit Commendations and one Vietnamese Civil Action Honor Medal are symbolized by the separate arms of the cross and the colors red and green.

The Distinctive Unit Insignia was approved on 3 June 1974.

Literature: Image and Information from The Institute of Heraldry, US Army.