From Heraldry of the World
Your site history : Acton
Jump to navigation Jump to search 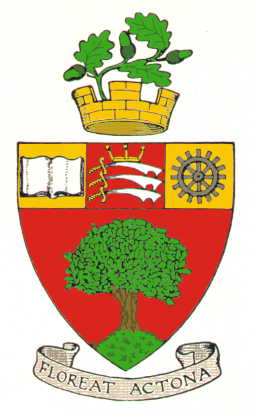 Arms: Gules an Oak Tree issuant from a Mount in base proper on a Chief Or between to the dexter an open Book and the sinister a Cog-Wheel both proper a Pale of the first charged with three Seaxes fessewise in pale proper pommelled and hilted Or points to the sinister and cutting edge upwards in chief a Saxon Crown of the last.
Crest: Issuant from a Mural Crown Or a Sprig of Oak fructed proper.
Motto: 'FLOREAT ACTONA' - May Acton flourish.

The oak in the arms and crest has reference to the name Acton - meaning ' oak town '. The book represents education and the cog-wheel the motor industry.