From Heraldry of the World
Your site history : Aldeburgh
Jump to navigation Jump to search 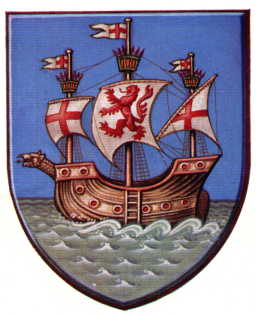 Arms : Azure on Water in base an Ancient Ship of three masts in full sail a Ladder affixed to the side amidships proper the mainsail charged with a Lion rampant the fore and aft sails and pennons each charged with a Cross Gules.

The arms indicate the importance for fishing for the town, which also was an important shipbuilding centre.