From Heraldry of the World
Your site history : Aldridge-Brownhills
Jump to navigation Jump to search 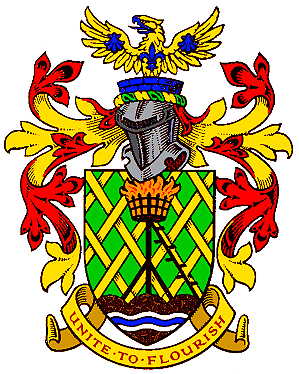 Arms : Vert fretty Or issuant from a Base composed of three Mounds of Earth proper charged with a Bar wavy Argent thereon another wavy Azure a Beacon Sable enflamed proper.
Crest : On a Wreath of the Colours issuant from a Circlet of Bricks Azure a demi Eagle Or beaked charged on the breast with a Fleur de Lys and on each wing with an Escallop Azure; Mantled Gules doubled Or.
Motto: 'UNITE TO FLOURISH'

The arms were officially granted on December 20, 1968.

The beacon was used as a device by the former Aldridge UDC and the green background de­notes the extensive "green belt". The golden fretting rep­resents the wealth, growth and vigour of the new urban dis­trict and the three undulating mounds of earth are an obvious allusion to the name Brownhills.
The wavy white and blue bars are an heraldic way of symbolising water and in particular they represent the increas­ing recreational facilities being provided by the Council, including a specific representation of the facilities at Chasewater.
The circlet, comprising the blue bricks of Aldridge, symbolises the district's association with industry.
The eagle, the scallop-shells and the fleur-de-lys represent the district's proud association with its many churches of all denominations. The eagle is for St. John, the shells for St. James, and the fleur-de-lys for St. Mary.

The motto was suggested by two senior pupils of Shire Oak Grammar School and was chosen from suggestions submitted by pupils of Secondary Schools throughout the urban district.