From Heraldry of the World
Your site history : Altötting (kreis)
Jump to navigation Jump to search 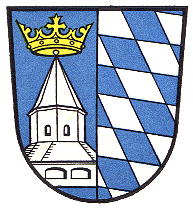 The arms show in the right part the chapel of the St. Mary, which was built in the 8th century. The chapel is considered the National Shrine of Bavaria. The left part shows the arms of Bavaria, on the one hand as a symbol of the state, and on the other hand they are a reminder of the fact that in Gurghausen a large castle (built in the 13th century) was owned by the Dukes of Bavaria. Furthermore the monastery in Altötting was founded by the Bavarian Dukes.