From Heraldry of the World
Your site history : Alwernia
Jump to navigation Jump to search 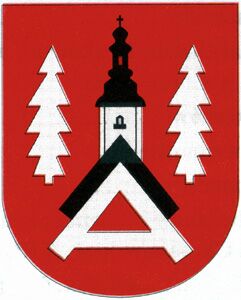 Originally the present town of Alwernia was founded around a Bernadine convent called Alwernia after its counterpart Alverno in Tuscany. The convent was founded in the early 17th century by Krzysztof Korycinski, the royal secretary of the King of Poland and Sweden, Sigismund III Vasa. During his visit to Italy, the royal secretary was much impressed by Alverno and decided to built a similar convent in Poland.

The arms of Alwernia displays a tower of the convent church, which is the focal point of the town and a letter "A" for "Alwernia", alongside with two spruce trees to mark forests around the little town. All the elements are white(or silver)/black against the red background.