From Heraldry of the World
Your site history : Amt Verl
Jump to navigation Jump to search 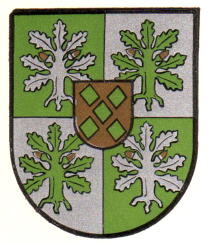 The diamonds in the escutcheon symbolise the 5 different municipalities in the Amt and the oak trees symbolise the many forests in the area. At the same time the oaks are a canting symbol, as the name is derived from Verlo, or four forests. The arms of Verl itself also showed the four trees.