From Heraldry of the World
Your site history : Anhalt-Zerbst
Jump to navigation Jump to search 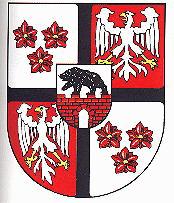 The main black cross in the arms is the cross of the Teutonic Order and symbolises the gift of the village Buro to the Order in 1258 by Count Bernhard I of Anhalt. The village was seat of a commander of the Order until 1809. The roses are taken from the arms of the Lords of Zerbst, who received a part of the city Zerbst in 1209. In 1253 the city of Zerbst was taken by the Margraves of Brandenburg. The eagle in the second and third quarter is taken from the arms of the Counts of Lindau, who owned both the castle Lindau and the castle Rosslau. In 1370 the area becae a possession of the Princes of Anhalt.

The escutcheon shows the arms of the State of Anhalt (see Bernburg).