From Heraldry of the World
Your site history : Ansbach
Jump to navigation Jump to search 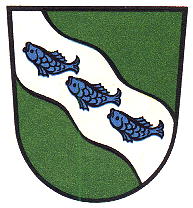 Ansbach was already a city in 1221, but when the city rights were granted is not known. The arms are derived from the arms of the Lords of Dornberg, who in the 13th century ruled the city. The oldest seal dates from the early 14th century and shows already a shield with a wavy bend, which is also a canting symbol (Bach=brook). In the 16th century the bend was decorated with small waves, since the end of the 17th century with three fish. The fish already appear on images in books etc since 1530, but not on official monuments and seals until the 17th century.

The first known colours of the arms are a red shield with a white bend. The green colour appears in the 16th century. In the 18th century the eagle of Brandenburg (the Duke of Brandenburg were also Counts of Ansbach), was added as a supporter. This supporter is still sometimes used.