From Heraldry of the World
Your site history : Anzoátegui State
Jump to navigation Jump to search 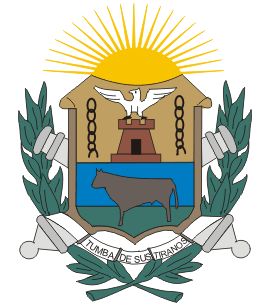 The fortress is the Casa Fuerte de Barcelona (The Fort-House of Barcelona) where the heroically patriots of these lands battled for the triumph of the freedom in the Independence War of Venezuela. The Phoenix symbolises the fatherland reborn of their own ashes and the broken chains, the emancipation of the Spanish yoke and the liberation of the slaves, decreed by General José Gregorio Monagas, illustrious son of the State, when he was President of Venezuela in 1854.The lower quarter of the arms shows a silvered bull stand on a natural landscape representing the cattle-rising riches of this federal entity.

The crest is a rising sun and represents the geographical situation of the state: the eastern region of Venezuela. Its rays reminds the municipalities of the Anzoátegui State.

The cannons at the back of the shield and jointed to a laurel crown laced by a silvered pennant with the motto "TUMBA DE SUS TIRANOS" (Tomb of their tyrants) symbolise the glories obtained by the Anzoateguensians in the Independence War of Venezuela. The motto, properly, reminds of the bloody Battle of Urica which was verified in these lands on 1814 and where died the dreadful Spanish General José Tomás Boves who devastated a great part of the Venezuelan patriot territories in these times.

The name of this State is an tribute to General José Antonio Anzoátegui, one of the Venezuelan patriot heroes of the Independence War and its capital is the city of Barcelona.