From Heraldry of the World
Your site history : Appenweier
Jump to navigation Jump to search 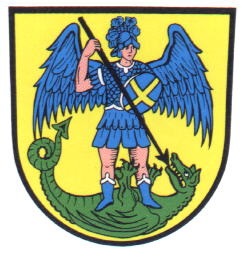 The arms were officially adopted on December 5, 1959 and were not changed after the additions in the 1970s.

The village was first mentioned in 884 as a possession of the Honau Abbey. The first time a local council was mentioned dates from 1364. The oldest seal dates from 1481 and shows the locat patron saint, the Archangel St. Michael. St. Michael was the patron saint of the Honau Abbey and therefore also of the village. The oldest seals shows the saint as a knight with helmet, sword and scales.

In the second half of the 17th century he appears killing the dragon. In 1903 the State Archives of Baden designed arms for the village based on the old seal, but until 1959 the village did not use the arms and used the saint on its seal without a shield. The colours are chosen arbitraily.