From Heraldry of the World
Your site history : Aragón > Aragona > Aragonio Malaspina > Aragua State
Jump to navigation Jump to search 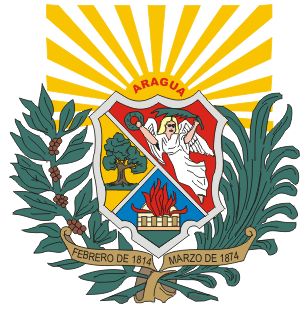 The Araguenian Coat of Arms consists in a field divided per bend and half counterbend. The first quarter in red shows a blond woman dressed and winged of silver which subject a laurel crown with her right hand and a palm branch with her left hand: representation of the ancient Greek goddess of the Victory which allude to the battle which got rid in the town with the same name, "La Victoria" (The Victory) on February 12th, 1814, where young students and seminarians of the University of Caracas fought jointly with the Patriot Troops under the command of General José Félix Ribas, one of the most valiant heroes of the Venezuelan Independence War, and won over the royalist army under the conduction of the Spanish Colonel Francisco Tomás Morales.

The second quarter in gold (yellow) shows a representation of the so-called "Samán de Güere" (Pitecellobium saman Jacq. Benth): historical tree admired by the famous German Naturalist Baron Alexander von Humboldt and his friend, the French Botanic Aimee Bonpland. In their visit to Venezuela on 1800, they calculated that the plant then was about 1.000 years old. Time after, El Libertador Simon Bolivar, it says, rested under its frond when he was on campaign and from these times until now, it constitutes ecological emblem of the State, representing too the inexhaustible fertility of the Araguenian ground.

The third quarter in azure (blue) presents a semblance of the Historical House called "El Ingenio Bolívar" ("The Bolivar’s Sugar Cane Farm and Mill") located in the town of San Mateo and property of El Libertador's family which was conditioned as Patriots' bastion during the War of the Independence: place where surrendered heroically his life the New Grenadine (Colombian) Colonel Antonio Ricaurte firing the Gun Powder deposits when the royalist troops took the house on March 25th, 1814.

As crest, a sun appears with the name of the state "ARAGUA" like a "war voice".

To the flanks, we can see a coffee and a sugar cane branches, two of the most important agricultural products of the region, jointed by means of a golden pennant which charges like mottoes the ephemeris "February of 1814" and "March of 1814" to remember the glorious facts of "The Victoria" and "San Mateo", previously mentioned.This Araguenian symbol, whose origin was that of Seal of the State starting from the eighth decade of the XIX century, it was decreed as Coat of Arms in 1905 and ratified as such in 1926.