From Heraldry of the World
Your site history : Arch-Duchy of Austria
Jump to navigation Jump to search 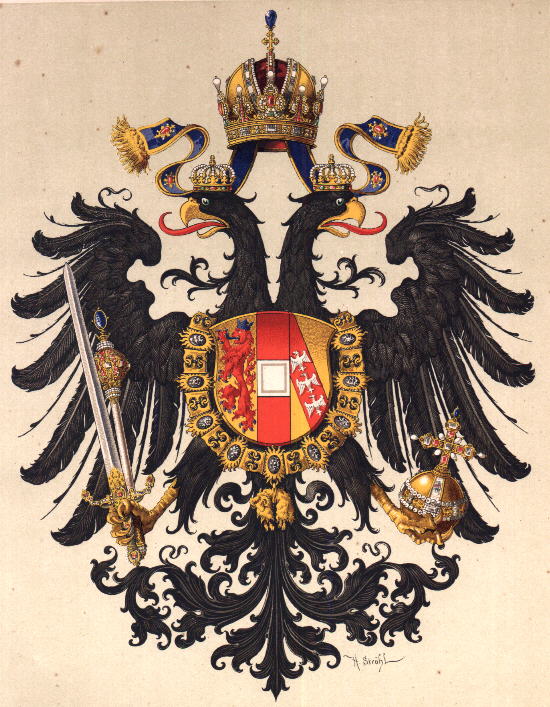 The above arms are the so-called small arms of Arch-Duchy of Austria, one of the two main territories in the Austrian-Hungarian Empire. The arms combine the lion of the Habsburg dynasty with the silver bar of the Duchy of Austria and the arms of Lotharingen (now Lorraine, France).

The original arms of Austria are the silver bar on a red shield. It appears for the first time in 1230 on the seal of Duke Friedrich II. The origin of the arms is not known, they are likely derived from the ducal banner. There have been many stories on the origin of the arms, some based on genealogical theories, others on fantasies, such as the white mantle of Duke Leopold, which was stained with blood during the siege of Acco in 1190/91, during one of the crusades. For the present arms of Austria, see the National Arms of Austria.

Already in 1325 the eagle was added as the supporter behind the shield. The eagle was the Imperial Eagle as the Dukes of Austria, from the Habsburg dynasty, were Kings (and Emperors) of the Holy Roman Empire at the time. Ever since the Habsburg family has used the eagle, first one-headed, later two-headed as the main supporter. The shield itself always was composed of the arms of the many territories the Emperors put their claims on. These arms were always personal arms and are thus not dealt with here.