From Heraldry of the World
Your site history : Arendonk
Jump to navigation Jump to search 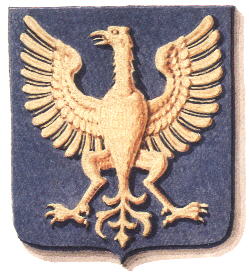 The arms are based on the 15th century seal of the town. The eagle, arend, is a canting element. On the oldest seal the eagle is placed in front of a thistle and some other flowers.

The historical colours are a black eagle in silver (sometimes shon as a silver eagle on black), but the municipality neve changed the colours.