From Heraldry of the World
Your site history : Båstad
Jump to navigation Jump to search 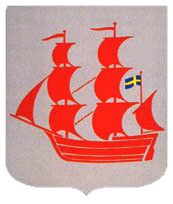 Even though Båstad received city rights in the early 15th century, it never developed into a city. The arms were granted in 1941, confirmed in 1974 and were based on a seal from 1783.

The seal showed a boat, probably as a canting symbol for båt-stad or boat-city. The present arms show a rather different boat, a typical ship for the late 18th century.