From Heraldry of the World
Your site history : Bad Orb
Jump to navigation Jump to search 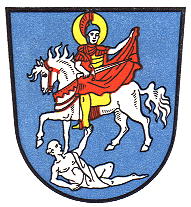 The arms show St. Martin, the patron saint of the city and of the State of Mainz, to which the city belonged. The saint was already used on the oldest seal of the city, dating from the 14th century. Besides the saint, the city often used the wheel of Mainz as the local symbol and arms.