From Heraldry of the World
Your site history : Bad Radkersburg
Jump to navigation Jump to search 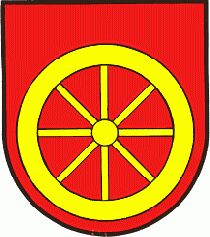 Radkersburg was founded in the middle ages as a border town, for trade and as a fortification. It has received city rights in the late 13th century.

The arms are canting. Radkersburg appears to be called after a medieval nobleman, but this is disputed among historians. For centuries, the city has used a seal showing a wheel (Rad).