From Heraldry of the World
Your site history : Balingen
Jump to navigation Jump to search 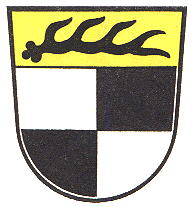 Balingen received city rights in 1255 by Count Friedrich of Zollern. In 1403 the city and surroundings were sold to Württemberg. The oldest seal is known from 1320, but probably dates from the late 13th century. The seal shows only the arms of the Zollern family, quartered of black and silver. After the transfer to Württemberg, initially nothing changed, the same seal was used. Only in the late 15th century the deer antler of Württemberg was added to the arms. The colours are known since 1535 and the arms thus have not changed since.

The arms did not change after the merger with the other municipalities and were officially granted again on June 18, 1975.