From Heraldry of the World
Your site history : Bath (England)
Jump to navigation Jump to search 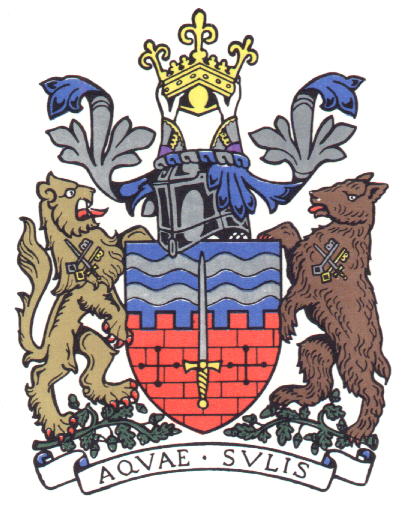 Arms : Per fesse embattled Azure and Gules the base masoned Sable in chief two Bars wavy over all a Sword erect Argent pomel and hilt Or between in base two Crosses bottonee of the third.
Crest : On a Wreath Argent and Azure issuant a dexter and sinister Cubit Arm habited holding aloft a representation of the Crown of King Edgar proper.
Supporters : On the dexter side a Lion and on the sinister side a Bear each standing upon a Branch of Oak fructed proper and charged on the shoulder with a Sword in bend proper hilt and pomel enfiling two Keys in bend sinister addorsed Or.
Motto: 'AQUAE SULIS' - The waters of Sul

The origin of the arms is not known. The oldest image of the arms (the above shield alone) can be seen on a map of Bath, dating from around 1568. Nevertheless rather different arms were recorded by the College of Arms during the Visitations in 1623. These arms, however, were never accepted or used by the city. The city tried in 1888 to have the old arms registered, but the attempt was unsuccessful. The city however, adopted in a local resolution, the old arms as official arms.

In 1971 the city officially applied for new arms and augmentation with supporters, crest and badge. The new arms were granted in 1971, but already in 1974 the local government reorganisation made the arms obsolete. In 1974 the Queen allowed the city to continue the arms granted in 1971. The arms itself show the city wall with two wavy bars for the Avon river and/or the mineral springs in the city. The sword is the symbol of St. Paul, the patron saint of the Abbey and city.

The crest commemorates the coronation of King Edgar in 973, showing the distinctive crown attributed to him. The crown is held by two hands as in the act of coronation. The sleeved hands are based on those of St Dunstan in the Edgar Window in the Abbey.

The supporters are first mentioned in 1590. The city did not always use supporters and also not always the same supporters. The meaning of the two supporters is not known. The shoulder badges show two keys and a sword, the combined symbols of St. Peter and St. Paul, the two patron saints of the Abbey. The wards of the keys are shown in the shape of the letter B for Bath.

The supporters stand on two oak leaves. These refer to the legend of King Bladud, said to have discovered the mineral springs when he was herding his pigs.

The motto is the Roman name for the city, meaning the Water of Sul (Minerva).