From Heraldry of the World
Your site history : Bayern
Jump to navigation Jump to search 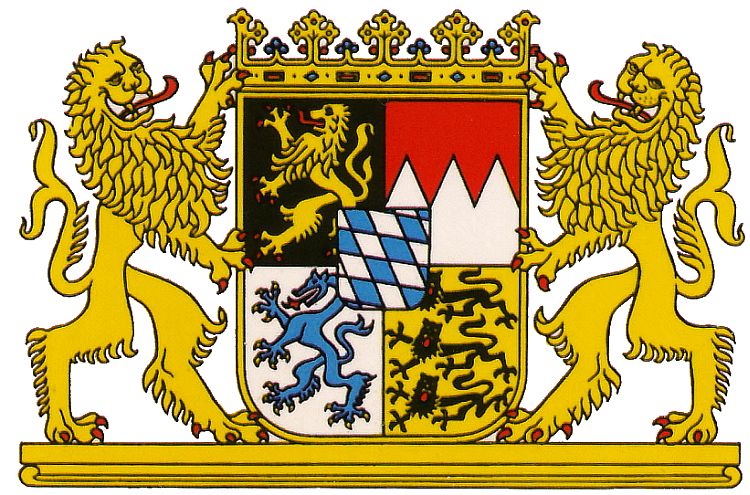 The present arms were officially installed on June 5, 1950.

The arms are a combination of : the lion of the Pfalz, representing the area of the Oberpfalz ; the arms of Franken (Franconia); the panther of the Counts of Ortenburg in Niederbayern; the three lions of the Dukes of Schwaben and the escutcheon with the arms of the Wittelsbach family (the longtime ruling family in Bayern)

The arms of Wittelsbach were taken from the arms of the counts of Bogen, who became extinct in 1242. The Wittelsbach family was related to the counts of Bogen and inherited their possessions along the Danube between Regensburg and Deggendorf. The first members of the family to use the arms were Ludwig and Heinrich, sons of Duke Otto, who used the arms in their seals around 1240. (see fig.) The arms have ever since been the arms of the family and thus appear in numerous arms in Bavaria, but also in surrounding States and even abroad (f.e. in Nieuw-Beijerland in Holland, a possession of Jacoba of Bavaria). The number of fields was already in the 15th century fixed as 21, but in 1806 the number was increased to 42 to symbolise the larger Kingdom of Bavaria at that time. The colours are also already known and unchanged since 1330.

The arms were augmented with the lion of the Pfalz (see Rheinland-Pfalz) when Ludwig I and Otto II were appointed as Counts of the Pfalz in the early 13th century. They appear on the seals of Otto in 1229. The lion was sometimes placed in separate arms in the seals of the Dukes.

The panther is the old arms of the Dynasty of Spanheim, who had large possessions in present Austria and Bavaria. The Bavarian branches named themselves after their possessions as Von Kraiburg and Von Ortenburg. The counts von Ortenburg became counts of the Pfalz in 1209, but became extinct in the same century. In the Pfalz the Wittelsbach family had already succeeded them . They also inherited and bought the possessions in Niederbayern in 1248 and 1259. The panther was added in the arms of the family in 1260 and used until 1390. The colours of the present panther are taken from the arms of Ingolstadt.

The oldest arms for Bavaria were identical to the Wittelsbach arms. In the 15th century the arms were used as shown above; a quartered shield with an orb in an escutcheon. The orb was a symbol of power and influence. The crests are from Bavaria and the Pfalz, the head is the head of the Counts of the Pfalz. The arms were used as such until the 18th century.In 1777 Prince Karl Theodor used new arms, that showed all possessions of the family grouped around the old arms. The fields show : Kleve, Jülich, Berg, Moers, Bergen op Zoom, Mark, Veldenz and Ravensberg.
Below the shield the chains of the Order Of the Golden Fleece, the Order of St. Hubertus, the Order of St. George and the Order of the lion of the Pfalz are shown (see below)

In the early 19th century the family increased their possessions and the original arms of the family were now surrounded by 16 smaller shields. These arms were for personal use and were not used by the Kingdom. The arms of the Kingdom of Bavaria were much more simplified; showing the old Wittelsbach arms with an escutcheon. The escutcheon showed the Royal regalia, scepter, sword and crown. As supporters two lions were used and the arms were placed on a royal mantle of ermine.

As in 1835 the official title of the king was : King of Bavaria, Count of the Rhein-Pfalz, Duke of Bavaria Franken and Schwaben, it was necessary to enlarge the arms with the territories mentioned. This resulted in the arms shown below, with Pfalz, Franken, Burgau (for Schwaben, the area of the Staufen family) and Veldenz. The arms could also be placed on the royal mantle.

When the Kingdom was dismantled new arms were devised for the State of Bayern, but until 1923 the old Wittelsbach arms were officially used. At the end of the last century O. Hupp devised new arms for the state, which showed a quartered shield with Wittelsbach, Pfalz, Staufen and Franken (see below). The lions of Staufen were shown only partly, as Staufen was only partly in the present state of Bayern. These arms were used from 1923 until the National-Socialists abandoned it in the 1930s. In 1950 the arms of 1835 were changed according to Hupp's suggestions, but with the addition of the diamonds of the Wittelsbach family.