From Heraldry of the World
Your site history : Berkshire
Jump to navigation Jump to search 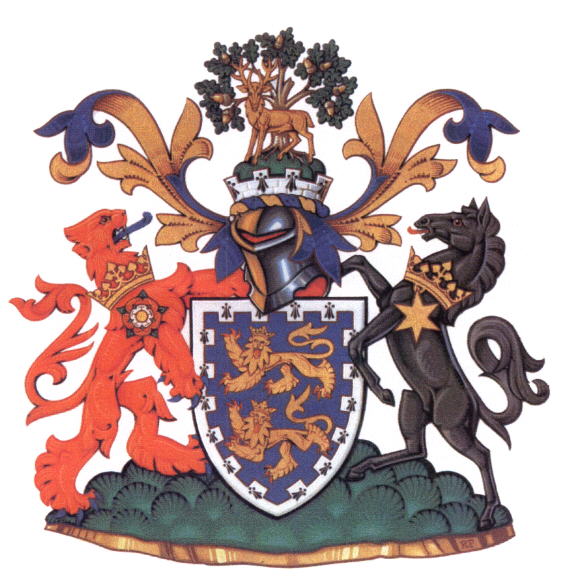 Arms : Azure two Lions passant guardant in pale each crowned with an ancient Crown Or within a Bordure embattled Ermine.
Crest : On a Wreath of the Colours upon a Mount Vert within a Mural Crown Ermine a Stag at gaze Or in front of a hollow Oak Tree leaved and fructed proper.
Supporters : On the dexter side a Lion Gules gorged with an ancient Crown Or charged on the shoulder with a Tudor Rose proper and on the sinister side a Horse Sable gorged with a like crown pendant therefrom a Mullet of six points Gold.

The arms were officially granted on 1974.

The two lions are the lions of England and symbolise the fact that Berkshire is a Royal County. The embattled border is intended to represent the castles in Berkshire, among these is the famous Windsor Castle.

The lion supporter is also a royal symbol. The lion is wearing a collar with the rose of Tudor, a symbol for the founding of Eton College by King Henry VI.

The black horse represents the county's considerable connections with horse racing. The old local breed of horses was, according to historical sources, black. The horse wears a collar with a six-pointed star, referring to the six boroughs and districts in the county. The star also refers to Sir William Herschel, the famous astronomer (see Slough). The crest symbolises the stags and forests of Windsor Forest, and has been the badge of the County since the 14th century. 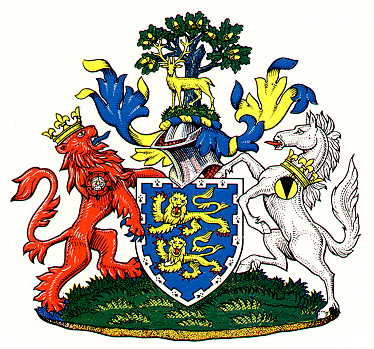 Arms : Azure two Lions pas­sant guardant in pale Or a Bordure embattled Ermine.
Crest : On a Wreath of the Colours upon a Mount Vert a Stag at gaze Or in front of an Oak Tree fructed proper.
Supporters : On the dexter side a Lion Gules gorged with an ancient Crown Or and charged on the shoulder with a Tudor Rose proper and on the sinister side a Horse Argent gorged with a like Crown pendent therefrom a Bezant charged with a Pile Sable.

The old arms showed the same shield and crest, except that in the new arms the crest rises from a mural crown, and in the old arms from a wreath. The lion supporter now wears the crown around its neck, in the old arms the lion was crowned. The main difference was the horse supporter. The old arms showed a white horse, referring to the Vale of the White Horse. Instead of a star the horse was wearing a yellow circle, charged with a black pile (pyramid pointed downwards), referring to the Harwell Atomic Energy Station.

Literature : Image provided by the Slough Library (AlisonD@sloughlibrary.org.uk), information from the Royal County of Berkshire Official Guide, 1973 and 1984.