From Heraldry of the World
Your site history : Berlin
Jump to navigation Jump to search 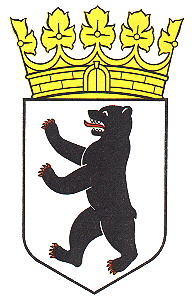 Berlin and its neighbouring village Kölln/Cölln were two fishing villages that received city rights in 1230 and were united in 1307 for the first time (only in 1709 Kölln became finally a part of Berlin). The city gradually gained importance and was one of the major cities in Brandenburg.

The oldest seal of Berlin dates from 1253 and shows the eagle of Brandenburg in front of a city wall (see also Spandau).

In 1280 on the new great seal the complete arms of the Dukes of Brandenburg are shown. On both sides of these arms a small shield appears, on which the canting bear can be seen. Soon afterwards the bear became the main symbol of the city. The bear also appears on medieval rolls of arms (see below).

On a seal from 1388 the bear has the arms of Brandenburg hanging on its neck, in 1448 the eagle appears on the back of a walking bear. The bear as the sole symbol does not appear on seals before 1618. Before that date it appeared as the sole symbol on coins and rolls of arms.

After the merger with the cities Kölln, Friedrichswerder and Dorotheenstadt in 1709, the bear became the main symbol. It was shown in a point, with the eagle of Brandenburg and the red eagle of Kölln above the point.

In 1839 the point was replaced by a small shield with the bear and a mural crown on the shield. The small arms of the city still only showed the bear.

Use of the arms on different collector's items

A series of matchbox labels with all West-Berlin arms can be seen here.

Some heraldic postcards with the arms of Berlin: