From Heraldry of the World
Your site history : Bermuda
Jump to navigation Jump to search 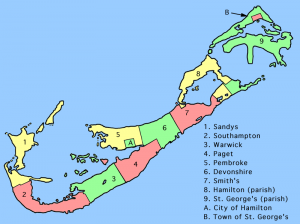 Bermuda is a British overseas territory in the North Atlantic Ocean. Bermuda is the oldest and most populous remaining British overseas territory, settled by England a century before the Acts of Union created the united Kingdom of Great Britain. Bermuda's first capital, St George's, was settled in 1612 and is the oldest continuously inhabited English town in the Americas.

Coat of arms of parishes and cities