From Heraldry of the World
Your site history : Bethnal Green
Jump to navigation Jump to search 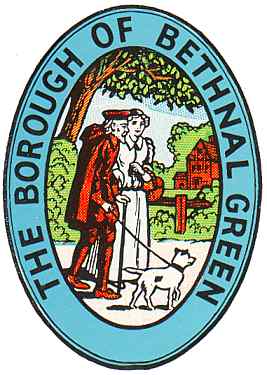 The borough had no arms, but the design of the Common Seal adopted by the Council bears reference to the apocryphal legend of The beggar's daughter of Bednall Greene, a lengthy poem which appeared in Percy's Reliques of ancient English poetry in 1765, and was probably written in Elizabethan times.

The story tells how Henry, son and heir of Simon de Montfort, believed to have fallen at Evesham in 1265, was found and nursed by a baron's daughter, who he afterwards married. Henry, blinded in the battle, dressed as a beggar to escape King Henry's spies. Later his daughter, "pretty Bessee", had four suitors at once - a knight, a gentleman of fortune, a London merchant, and the son of the innkeeper at Romford, and all (except the knight) cooled in their affections when told they must ask the consent of her father, the poor blind beggar of Bethnal Green. The knight, however, went and asked the beggar's leave to marry his daughter and, unknowingly, gained a considerable dowry, Henry giving Bessie £3,000, and £100 to buy her wedding gown. At the wedding feast it was explained to the guests who Henry really was.

The story, although almost certainly legend, enjoyed a wide vogue and must have had a basis in fact. Three plays on the subject are in existence, and printed versions have appeared in numerous editions. As far back as 1690 the theme was used as a decoration for the Beadle's staff.