From Heraldry of the World
Your site history : Bilston
Jump to navigation Jump to search 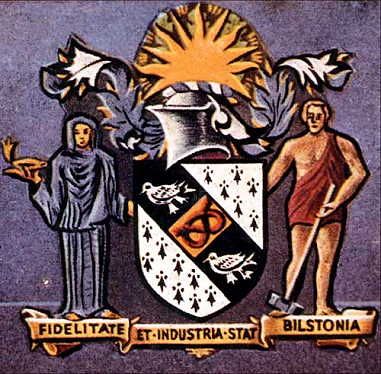 Arms : Ermine on a Bend Sable between two Martlets Argent a Fess Or charged with a Stafford Knot Gules.
Crest : On a Wreath Argent and Sable in front of three Oak Leaves Vert a rising Sun Or.
Supporters : On the dexter a Female Figure representing Faith habited in a Robe Azure and holding in the dexter hand a Lamp proper and on the sinister a Male Figure representing Vulcan habited in a Tunic Gules and holding in the sinister hand a Hammer resting on the ground also proper.
Motto: 'FIDELITATE ET INDUSTRIA STAT BILSTONIA' - Bilson stands by its faith and industry.

The arms were officially granted on September 10, 1933.

The shield is derived from the arms borne by Sir Walter de Bilston, a local landholder, who appears to have fought at the Battle of Evesham in 1265. His arms were formerly used by the Urban District Council and here the middle of the three martlets on his shield has been replaced by the red Stafford Knot on a gold fess or strip.

The rising sun refers to the derivation of the name Bilston, which appears to have been compounded of the words "Baal" or "Bel" and "ton", the place of sun or fire worship. The oak leaves recall that before the industrial revolution Bilston was situated in the midst of a large oak forest.

The supporters carry the idea of the motto a stage further. The man represents industry, and is of the type that we usually associate with Vulcan, and the woman holding a lamp represents Faith.

The motto is derived from an older one "Industria et Lahore Edurat Re Bilstonia" - an anagram, meaning "Bilston endures by its industry and labour". The new motto suggests that Bilston is concerned not only with the physical and mental, but with the spiritual aspect of life.