From Heraldry of the World
Your site history : Borgholzhausen
Jump to navigation Jump to search 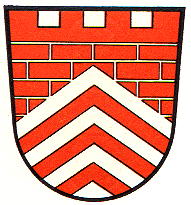 The arms are identical to the arms granted in 1938 to the former Amt Borgholzhausen. The chevrons are taken from the arms of the counts of Ravensberg, who had one of their castles close to the city. The wall symbolises the city itself. The chevrons were also used in the oldest known arms of the city, dating from the 18th century.

Previously the city used arms with the same elements, granted on August 28, 1928, see below. 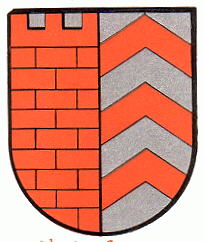 Hupp showed the arms in the 1920s with only the chevrons of Ravensberg: