From Heraldry of the World
Your site history : Brandenburg
Jump to navigation Jump to search 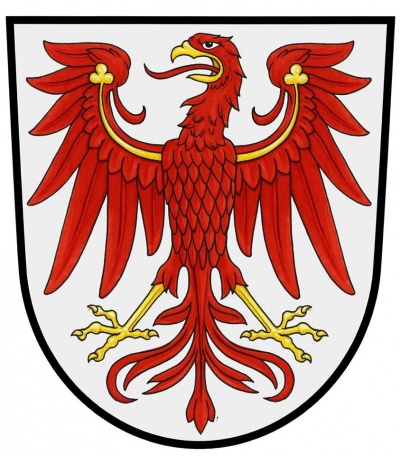 In 1134 King Konrad III appointed Albrecht the Bear of the Ascanier dynasty as vassal of the Nordmark. In 1150 he inherited the Havelland area, including the city of Brandenburg. Since 1157 he used the title Markgraf (Margrave) of Brandenburg, a title which was continued by his successors, also from other dynasties. Albrechts son, Otto I, first used the eagle in his seal around 1170. The eagle was derived from the German Imperial eagle, as the area was still a loan from the German Emperors. The colours were probably taken as canting, Brand meaning fire. When the golden trefoils on the wings were added is not quite clear, but most likely already in the 13th century.

In 1417 Friedrich VI of Hohenzollern, Count of Nürnberg, was appointed Margrave of Brandenburg on the Concilium of Konstanz by Emperor Sigismund. The Emperor also gave him a sceptre as a symbol for his new territory. He used this sceptre in his personal arms in gold on blue, but it was not used widely in the arms of the territory itself. Only in 1864 the sceptre was added as a breast-shield on the eagle.

These arms were continued until 1945 by the Prussian Province of Brandenburg. The province used three types of arms, as shown below.