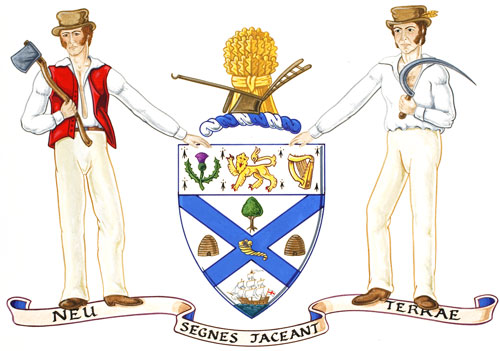 (UK grant)
Arms : Argent, on a saltire azure, between an oak-tree eradicated in chief, two bee-hives in fess and a ship under sail in base all proper, a cornucopia gold, a chief ermine, thereon a lion passant guardant or, between a thistle slipped also proper and a harp also gold.
Crest : A plough proper in front of a garb or.
Supporters : (Dexter) a woodman habited proper holding in the exterior hand an axe also proper, (sinister) a reaper habited proper holding in the exterior hand a sickle also proper.
Motto: " Neu segnes jaceant terrse."

(Canadian registration)
Arms : Argent on a saltire Azure between in chief an oak tree eradicated, in fess two bee hives and in base a ship under sail all proper, a cornucopia Or, on a chief Ermine a lion passant guardant Or between a thistle proper and a harp Or
Crest : A plough proper in front of a garb Or
Supporters : Dexter a woodman holding an axe sinister a reaper holding a sickle proper
Motto: NEU SEGNES JACEANT TERRAE

The arms were officially granted on ? (Grants registration xl, 115, 117; London) and registered as historical arms on August 15, 2012 (Canadian registration)

If you have any information on these arms American Land Company mail us !