From Heraldry of the World
Your site history : Burcht
Jump to navigation Jump to search 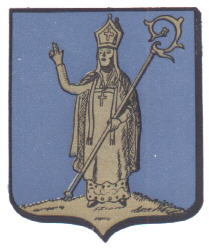 The arms show the local patron saint, St. Martin, in an unusual composition, as the saint is normally shown as a knight cutting his cloak for a beggar.

The original arms, granted by the Dutch government on April 29, 1818, showed a shield of red, which was changed in 1847.