From Heraldry of the World
Your site history : Burgschwalbach
Jump to navigation Jump to search 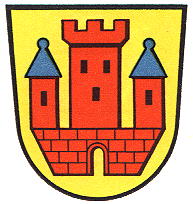 The arms show a canting castle (Burg=castle), which first appears on the 16th century seals of the city (city rights were granted in 1368). When the arms were re-designed in the middle of the 20th century the colours were derived from the arms of the Counts of Katzenelnbogen, who had granted the city rights.