From Heraldry of the World
Your site history : Burlöv
Jump to navigation Jump to search 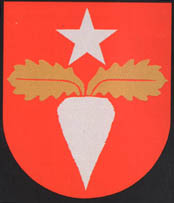 The municipality applied in the 1950s for arms to the State Archives. The municipality wanted to have three symbols included : for the local agriculture a sugar beet, a symbol for one of the countries oldest schools in Vilan and for the typical Dutch style Kronetorp windmill. As a combination of three symbols did not result in arms that were acceptable, the present arms were devised and granted in 1959 and confirmed in 1974.

The arms show a sugar beet and a star, taken from the symbol of the school. In the 1980s the municipality wanted again to include the windmill, but the arms were never changed.