From Heraldry of the World
Your site history : Cambridge
Jump to navigation Jump to search 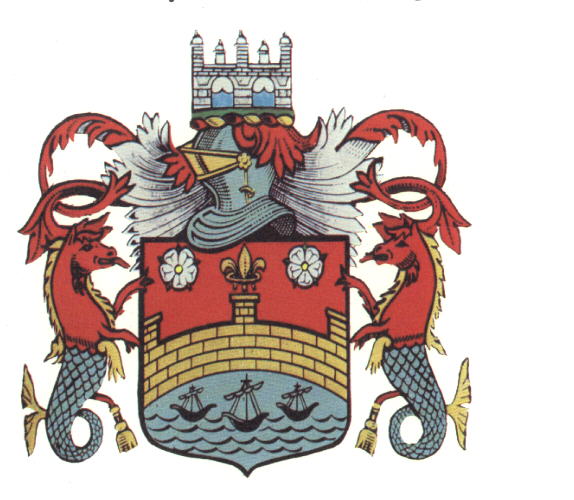 Arms : Gules a Bridge of one arch surmounted by three Towers Or in chief a Fleur-de-Lys Gold between two Roses Argent the base barry way of the last and Azure thereon three Ships each with one mast and yardarm the sail furled also Sable.
Crest : On a Wreath Or and Gules upon a Mount Vert a Bridge in the form of a castle with two Ports and three domed Towers and between the Towers two Turrets also domed Argent.
Supporters : On either side a Sea Horse the upper parts Gules the nether part proper finned Or

The arms were officially granted on 7 June 1575 and slightly changed in 1974 by adding the helmet and mantling and some change in the crest.

Cambridge owes its name and early development to the bridge at the farthest navigable parte of the Cam (formerly Granta) river. The arms show this importance in the bridge, ships and sea-horses. The roses and the fleur-de-lis are royal and national emblems. The crest was originally described as a bridge, but looked much more like a castle until 1974 (see image on postcard below), when it was shown as a proper bridge. The original Cambridge Castle stood on a hill just above the bridge. In 1974 were added and the crest was changed, otherwise the arms were not changed.