From Heraldry of the World
Your site history : Carabobo State
Jump to navigation Jump to search 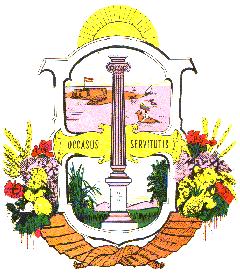 The lower part of the logo (these are not true heraldic arms) shows the countryside of Carabobo. From the base rises a pillar, a monument erected by the Cúcuta Congress to commemorate the battle of the 24th of June 1821. On each side of the pillar is a local important crop, a coffee shrub and a bunch of sugar cane.

The upper half shows the island fortress near Puerto Cabello, assaulted by the cavalry on November 8, 1823, a battle which ended the Spanish occupation in the area. The same is symbolised by the motto between the two halves : Occasus Servitutis.

The two cornucopia below the composition are derived from the National arms, whereas the sun is the symbol for the birth of the Republic.