From Heraldry of the World
Your site history : Casteau
Jump to navigation Jump to search 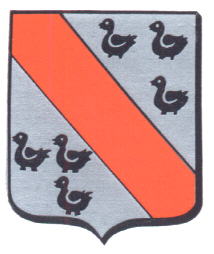 The arms are those of the medieval family De Casteau. The arms were also used on the first seal of the village, dating from 1619. When the seal was granted, Lady Noircarmes, lady of Maingoval, Casteau etc etc, described the arms as the 'historical arms of the village' to be placed on the seal. All later seals also showed these arms.

On a map of Hainaut from 1774 completely different arms for the village are shown; in red three golden castles. These arms were probably canting (Châteaux means castles), and were never used elsewhere.