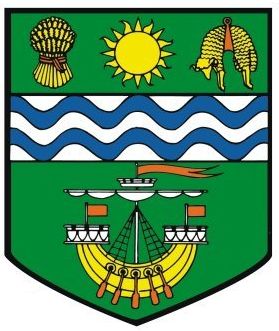 The background is green and represents the fields and the pastures of the District. The ship represents the exports on which the District depends for its prosperity The sun with straight and wavy rays, represents light and warmth, the two necessities for growth, the sheaf of wheat represents horticulture and the fleece represents agriculture. The two rivers, Waipawa and TukiTuki are represented by the two wavy blue bars.