From Heraldry of the World
Your site history : Chênée
Jump to navigation Jump to search 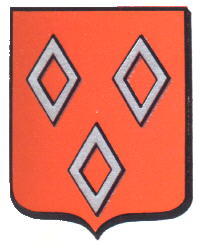 The arms have never officially been granted. The municipality applied for these arms in 1897, but the application was rejected.

The arms are those of the Sougné family, governors of Chênée in the 13th anc 14th century. The application was rejected, as it could not be proven that the local council ever used these arms. The municipality, however, used the arms non officially.