From Heraldry of the World
Your site history : Charlottenburg (Berlin)
Jump to navigation Jump to search 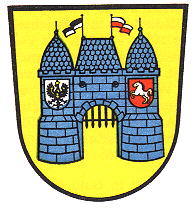 The arms were granted on January 7, 1957 for the district of Berlin.

In the late 19th century Hupp showed the arms with the eagle facing left instead of right, which would be more appropriate as in heraldry it is common practice that animals in arms of spouses face each other.