From Heraldry of the World
Your site history : Charneux
Jump to navigation Jump to search 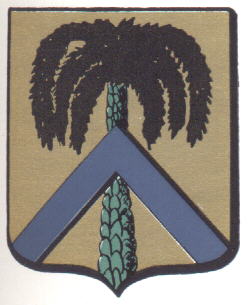 The arms were officially granted on November 24, 1819.

The arms show a European maple behind a chevron according to the official blason. All images, however, show a palm tree. To make it more complicated, the mayor of the village had asked for a beech tree, as the name Charneux could be derived from a beech-forest. Somehow the blason was changed to a maple, but the designer of the arms in the register made it a palm tree. It has been shown as a palm tree ever since.

The chevron was added by the mayor to give it a more heraldic design, but he also indicated that the chevron should stand for the vigilance of the local villagers. He stated that none of the 28 local men that were enlisted and 8 volunteers for the national militia deserted during the Napoleonic wars.
He also applied for two lion supporters as support of King William I. The chevron was granted, but the lions were not deemed acceptable for a small village.