From Heraldry of the World
Your site history : Chełmsko Śląskie
Jump to navigation Jump to search 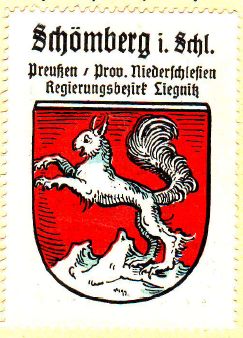 The arms show a jumping squirrel on a hill. On August 4, 1581 these arms were granted by Emperor Rudolf II. The official description of the animal reads "...zum Sprung geschichter Schönberg mit augeworfenen Schwanz und offnem Maul" (a "Schönberg" ready to jump, with tail high and open mouth), but it is not known what a Schönberg is supposed to be. The image above is based on the official record and described as a squirrel or even a beaver (although the tail definitevely is not like a beaver).