From Heraldry of the World
Your site history : Christchurch (New Zealand)
Jump to navigation Jump to search 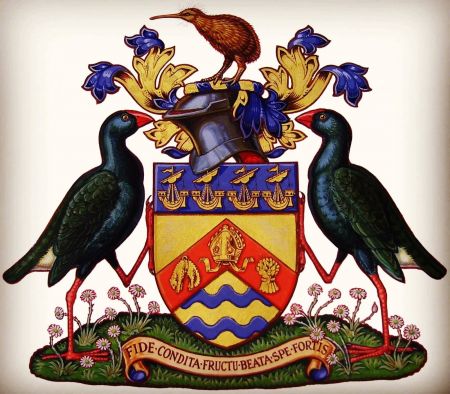 Arms: Or on a Chevron Gules a Mitre between a Fleece and a Garb of the first in base two Bars wavy Azure on a Chief of the last four Lymphads sails furled, also of the first.
Crest: On a wreath Or and Azure a Kiwi proper.
Supporters : On either side a Pukeko proper.
Motto: Fide Condita, Fructu Beata, Spe Fortis.

The Coat of Arms formerly used by Christchurch was not registered and did not comply with accepted heraldic principles (see image below). It was felt appropriate, therefore, that a proper grant should be obtained prior to the centennial celebrations of Canterbury Province, to be held in 1950. An application for armorial bearings was therefore made to the Earl Marshal of England by the Mayor, Aldermen and Citizens of the City of Christchurch and by Warrant under his hand and Seal, dated 18th November 1948, the Kings of Arms were authorised and directed to grant armorial ensigns and supporters accordingly. The Letters Patent, dated 21st February 1949, was signed by Sir Algar Henry Stafford Howard, Garter, Sir Arthur William Stewart Cochrane, Claren¬ceux, and Sir Gerald Woods Wollaston, Norroy and Ulster.

The significance of the main features are as follows:
The Lymphads Represent the "first four ships" of the Canterbury settlement which arrived at Lyttelton in December 1850. The Mitre recalls that Christchurch was planned as a Church of England settlement and was made a Bishop's See, with City status, by Queen Victoria in 1856. The Fleece & Garb denote the agricultural and pastoral pursuits of the surrounding province.

The Bars Wavy represent the two small rivers running through the City - Avon and Heathcote.

The supporters are Pukekos (or swamp hens) - a native bird found in and around the City. The crest is a Kiwi, a flightless native bird used as a N.Z. National emblem.

The Flowers on the compartment are Celmesia mackaui, a type of mountain daisy found only in the Banks Peninsula area.

The Motto FIDE CONDITA, FRUCTU BEATA, SPE FORTIS may be translated: (A City) Founded in Faith, Rich in the Fulfilment thereof, Strong in the Hope for the Future. The Latin, however, means rather more than that as - (1) "Fide condita" is a reference to ecclesiastical origins and the name of the City, taking "fides" in the sense of the Christian Faith. (2) "Fructu beata" means "rich in the fruits of the earth" and "rich in the fruits of her industry", as well as in the fulfilment of the Founders' Faith. (3) "Spe fortis" means at once "strong in hope" and "bold in her claims upon the future". 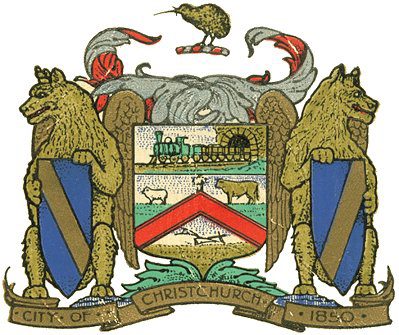 This rather unheraldic device showed a mining train coming out of the mine, symbols for agriculture. The two supporters are ?? and hold each a shield with the arms of ??.