From Heraldry of the World
Your site history : Cloppenburg
Jump to navigation Jump to search 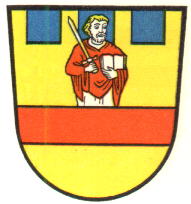 Cloppenburg received city rights in 1435 from Heinrich II of Moers, Bishop of Münster. The arms were granted at the same time and show the arms of the Counts of Moers at the time, with St. Paul as the patron saint of Münster. Originally the saint was kneeling, but later he is shown as present. As a crest St. Paul was used. This crest is now rarely used. The original black colour of the bar was changed to red in 1935, as it was the colour of Münster.