From Heraldry of the World
Your site history : Cojedes State
Jump to navigation Jump to search 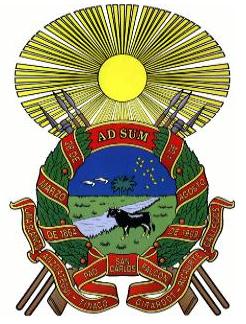 The arms consist of a circular seal with a simple field enameled on blue where appears a semblance of the predominant landscape in the region. On the fine carpet of the llanos (the Venezuelan plains) groups of palms and diverse trees stand out on intervals for reveal the fecundity of the Cojedenian ground. Crossing on counterbend its shows an undulant silver tape that represents a navigable river for where the force that impels the trade of the federal entity circulates. There, a magnificent black bull with the horns and hooves in gold, stands out on its foot for dominates with their look the immensity of the llanos, to symbolise the prosperity of the cattle raising, the main source of the wealth of the Cojedes State.

In the upper dexter canton and over the horizon, two white herons lift the flight in the face of the first radiances of the dawn, while on the upper sinister canton it stands out the constellation of Orion which dominates the Venezuelan and Cojedenian sky the most part of the year, to represent the heroes of this land that contributed with their courage and with their blood to forge the destiny of Venezuela. As external ornaments, the shield presents a resplendent sun like a cimier, symbol of Glory, which illuminates the Latin war voice (I am Present) as timmer, that represents the attitude of the Cojedenians in front of the history: ready and sign to spill its blood Iike yesterday to defend the causes of the Right and of the Freedom.

The laurel crown that surrounds the field as a border and the war trophies, four lances and two rifles with soaked bayonets crosses on saltire behind the shield, symbolises the victories that the Cojedenians reached in the fight for the national emancipation. The scarlet pennants that wrap the crown and hold it under the shield, presents like mottoes the ephemeris 28 de Marzo de 1864 (date when the Federal Constitution of Venezuela was sanctioned) and 4 de Agosto de 1909 (date of the creation of the State) and also, the names of the municipalities that integrate it “LIMA BLANCO”, “ANZOATEGUI”, ”TINACO”, “PAO”, “SAN CARLOS”, “FALCON”, “GIRARDOT”, “RICAURTE” and “GALLEGOS.”