From Heraldry of the World
Your site history : Cumberland (county)
Jump to navigation Jump to search 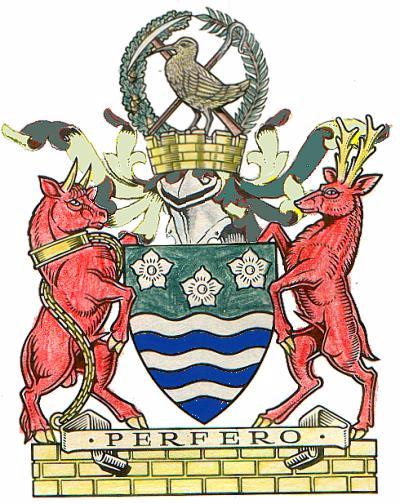 Arms : Per fesse vert and barry wavy of six Argent and Azure in chief three Parnassus Flowers proper.
Crest : Issuant from a Mural Crown Or a Wreath on the dexter side of Oak fructed and on the sinister side of Ash in front thereof a Pick and a Shepherd's Crook in saltire and perched upon the crown a Curlew all proper.
Supporters : On the dexter side a representation of the Dacre Bull at Naworth Gules armed unguled and collared with a Chain reflexed over the back Or and on the sinister side a Roebuck also Gules armed and unguled Or, the whole upon a Compartment in the form of a masoned embattled Wall Or.
Motto: 'PERFERO' - I carry through

The arms were officially granted on September 19, 1951.

The arms represent the natural features of the County, the flowers referring to the grass of parnassus which grows on the marshy uplands, while the base of the shield stands for the rivers, lakes, and seaboard.

The pick and crook allude to the local activities of mining and sheep-rearing. The curlew is a bird common in the uplands of the County, and the mural crown is commonly found in the arms of municipal authorities

The bull of the ancient Cumberland family of Dacre is an historic emblem associated particularly with the old Border warfare, and the roebuck is traditional to the County. The supporters are shown standing on a masoned base representing Hadrian's Wall.