From Heraldry of the World
Your site history : Czechowice-Dziedzice
Jump to navigation Jump to search 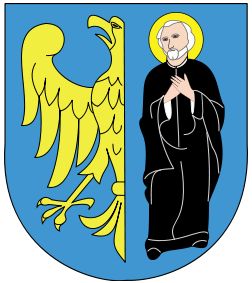 The arms were officially adopted on December 28, 2007.

The arms show the eagle of Silezia with the local patron saint, St. Andrew Bobola.

The towns of Czechowice and Dziedzice were unie din 1951. from 1951-1975 the new city use dthe older (non official) arms of Czechowice, see below.

In 1975 new arms were designed. These showed in an azure field the hexagonal symbol of benzene in orange, the vertical walls were formed by two golden ears of corn, and the interior was filled with a grey cogwheel. It symbolised the chemical and heavy industries in the town as well as agriculture.