From Heraldry of the World
Your site history : Dinant
Jump to navigation Jump to search 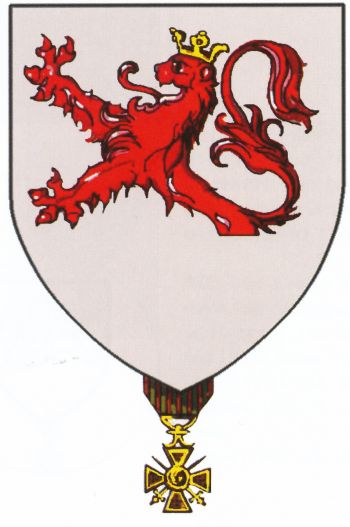 Dinant was an important fortress city already in early medieval times. The oldest known seals date from the late 14th century and show a tower and a bridge over the Meuse river. In 1399 a new seal showed a city with three towers, the local patron saint and the patron saint of the State of Liège, to which the city at the time belonged. On the middle tower a small shield was seen, with a demi-lion. A later seal, known since 1466, shows St. Perpète, the local patron saint, holding a shield with the lion. Coloured images are known from the 16th century and the arms have not changed since.

In 1840 the arms were granted with a red lion and red rushes in silver, this was corrected in 1927, with the addition of the French War Cross. 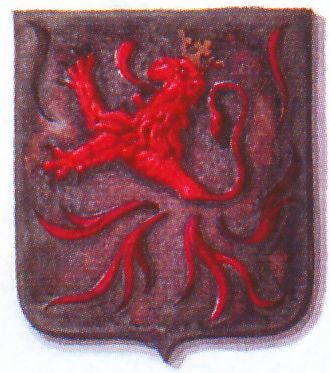 The origin of the lion is not clear. It has been speculated that the arms are derived from the arms of the oldest Lords of Dinant.

Another story deals with the battle of Steppes in 1214, where the troops of Liège, especially from Dinant, fought the army of the Dukes of Brabant. During the battle St. Lambert, patron saint of Liège, appeared in the sky. This gave power to the forces of Liège and they defeated the Brabant forces, thereby cutting the banner of the Duke of Brabant in half. The arms of Brabant show a golden lion on a black field. Ever since the city of Dinant used the demi-lion....

Finally it has been speculated that the lion is derived from the arms of the Counts, later Dukes, of Limburg.