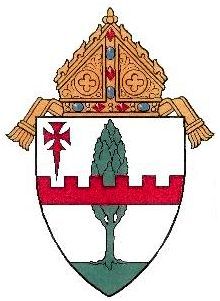 The red embattled fess represent the fortifications that traditionally surrounded all cities, especially frontier cities like Boise. In the diocesan arms, the comet in the arms of pope Leo XIII is replaced by a small red ornamental cross,with a comet tail.