From Heraldry of the World
Your site history : Diocese of Erfurt
Jump to navigation Jump to search

Established : 1973 as Apostolic Administration of Erfurt-Meiningen
elevated to Diocese of Erfurt in 1994 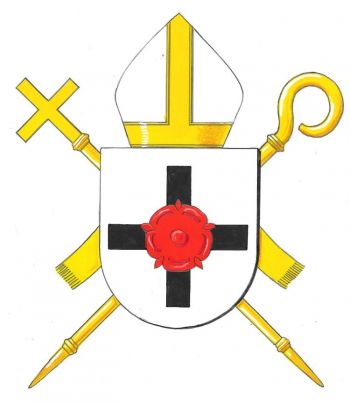 The diocese is formed from the Eastern part of the Diocese of Fulda, hence the arms show the black cross of Fulda with an additional rose as a symbol for St. Elisabeth von Thüringen.

The first bishops used as a symbol for the diocese from 1962-1984 a silver wheel in green, based on the arms of the Archdiocese of Mainz, to which the area historically belonged, but in different colours. In 1984 new arms were proposed, combining the arms of Thüringen, with the stars replaced by roses for St. Elisabeth, and the wheel of Mainz with the points of Franken. These arms have not been used, as the current arms were adopted.