From Heraldry of the World
Your site history : Diocese of Las Vegas
Jump to navigation Jump to search 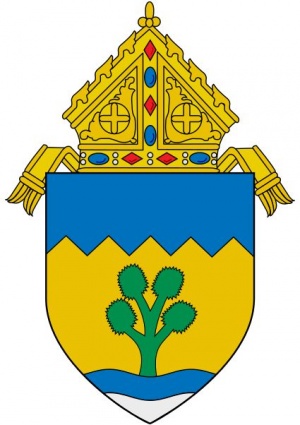 The gold reflects the arid desert region of the Southwestern United States and, in particular, Nevada, which makes up most of the diocese. The blue indented chief gives symbolic representation to the many mountains in the landscape under the deep blue western sky.

The blue and silver wavy bars at the base honor the Colorado River whose waters are such a significant part of the region.

The Joshua Tree (Yucca brevifolia) is indigenous to the area. This particular type of yucca tree is called the Joshua Tree because of the sword shaped leaves, on outstretched limbs, recalling the posture of the prophet Joshua as he pointed his spear at the city of Ai, as recorded in the old testament (Joshua 8:18).