From Heraldry of the World
Your site history : Dudley
Jump to navigation Jump to search 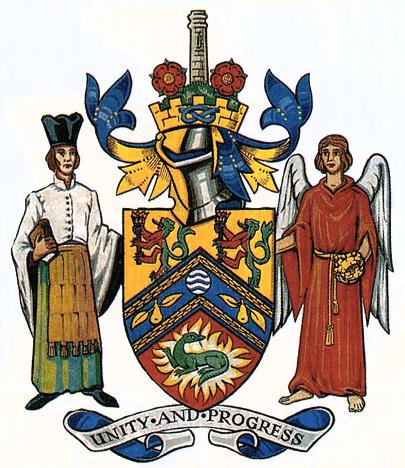 Arms : Per chevron Or and Gules a Chevron Azure between in chief two Lions rampant per pale Gules and Vert each supporting a Beacon fitted proper and in base a Salamander reguardant fitted proper on the Chevron between two Pieces of Chain each in chevron Or a Roundel barry wavy Argent and Azure between two Pears slipped and leaved Or.
Crest : Upon a Mount Vert rising from a Mural Crown Or charged with a Stafford Knot Azure a representation of Sedgley Beacon Tower proper between two Roses Gules barbed and seeded proper, Mantled Azure doubled Or.
Supporters : To the dexter a Canon of the Premonstratensian Order holding in his exterior hand a closed Book proper and to the sinister an Angel proper winged Argent habited Gules girded and holding in the exterior hand a Mural Crown Or.
Motto: 'UNITY AND PROGRESS'

The upper part of the shield contains two lions taken from the Halesowen arms, the salamander in the base is taken from the old Dudley arms. It symbolises the metal working industry. The fired beacons held by the lions are taken from the arms of Coseley and Brierley Hill and allude to local industries.

The crest is mainly taken from the Sedgley and Cseley arms. The roses refer to the briars once common in the area and from which Brierley Hill derives its name. The Stafford knot refers toStaffordshire.

The supporters are a Canon of the Premonstratensian Abbey in Haleslowen, and an angel taken from the arms of the Earls of Dudley. 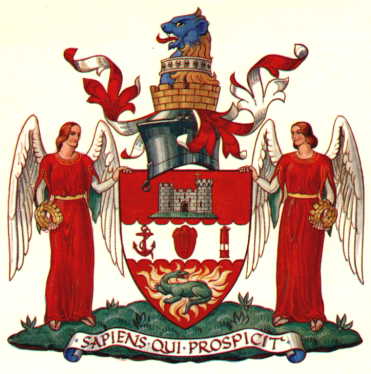 Arms : Gules on a Fesse engrailed Argent between in chief on a Mount Vert a representation of the Keep of Dudley Castle proper the sinister Tower ensigned with a Long Cross Or and in base a Salamander in Flames also proper a Trilobite between an Anchor cabled and a Davy Lamp all of the First.
Crest : Out of a Mural Crown Or a Lion's Head Azure maned Gold collared Ermine, Mantled Gules doubled Argent.
Supporters : On either side an Angel proper winged Argent habited Gules girdled Or and holding in the exterior hand a Mural Crown Gold.
Motto: 'SAPIENS QUI PROSPICIT' - He is wise that looks ahead

The shield and crest follow closely a device used as the Common Seal of the Corporation since 1866. The representation of Dudley Castle Keep is shown with a cross on the sinister tower, presumably intended to refer to the Priory which was attached to the Castle. The anchor and miner's Davy Lamp signify local industries, between them is a representation of a trilobite, a fossil animal commonly found in the limestone quarries at one time, and locally known as the "Dudley Bug" or "Dudley Locust". Coal mining and limestone quarrying have long died out in Dudley, but anchors are still made here. The salamander in flames is the traditional emblem of the smith and so is most appropriate to Dudley. Frederick Smith, first Mayor of the Municipal Borough, who conceived the design on which the Common Seal was largely based, suggested this emblem as being symbolic of the many furnaces in and around Dudley at that time. Two salamanders in flames occur on the family arms of Frederick Smith, no doubt in punning reference to the surname, and this is probably the source of his suggestion.

The lion's head is derived from the crest of the Earl of Dudley. Here it rises from a mural crown, signifying local government, instead of the original ducal coronet. It is also altered by having a gold mane and an ermine collar, which serves a double purpose in differentiating the Corporation crest from others and at the same time indicating its derivation, since the shield of the Wards, Earls of Dudley, bears a bend ermine.

The two angels derives, like the crest, from the arms of the Earl of Dudley, whose supporters are also two angels, but in accordance with the requirements of heraldry, the colours of the wings and robes are different, also the Dudley supporters are girdled and carry the mural crown.

Literature : Image and information provided by the Dudley Council