From Heraldry of the World
Your site history : Dudzele
Jump to navigation Jump to search 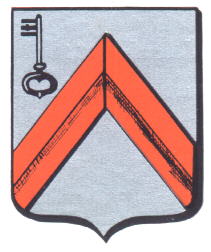 The arms are derived from the arms of the oldest Lords of Dudzele, which were first mentioned in the early 13th century. Their arms are mentioned in numerous rolls of arms from the Middle Ages. The family held the estate in loan from the St. Peter Abbey in Gent. The key in the upper right corner is the symbol of St. Peter.